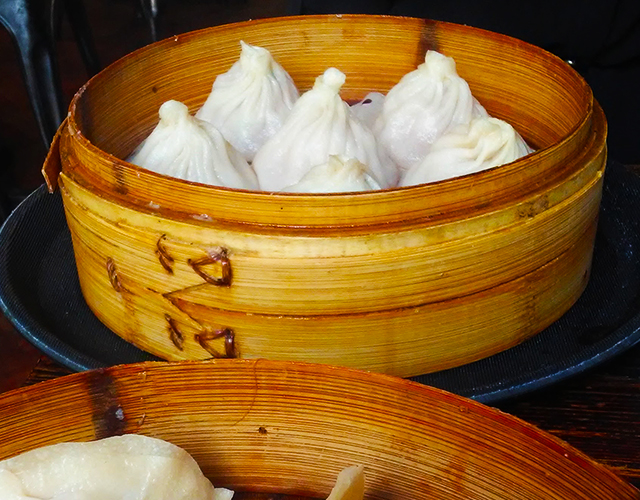 “New Dumpling Place Opens” read the headline, or at least that was the copy through the lense of my memory. It was just over a year ago when the Drunken Dumpling opened theirs doors. I had read about it in one online periodical or another, and was intrigued. It was most likely the allure of the largest soup dumpling this side of the Prime Meridian, but that was enough for me.

I had planned two separate occasions to visit, but was cut short both times. The first time it was a scheduling thing. I had gone at four, when they were closed between lunch and dinner, and my stomach demanded I go elsewhere. On the second occasion It was just too packed, and again my stomach protested waiting any longer, so I moved on.

As is often the case, third time is a charm. On a tepid summer day, my planned visit finally came together. Me and a friend stopped in for lunch, and quickly glanced over the menu. I like the fact that everything here is organic, and farm to table like. Lets be honest, I love dumplings, and I get them from all types of places. However, many dumpling places most likely don’t use the highest quality ingredients. Now this isn’t a knock on those places, I’m fine with that. But it is nice that there is a place like Drunken Dumping.

Many of the options are your classics, dumplings you’re no doubt familiar with, pork and chive anyone. They also have that large soup dumpling that I mentioned, but me and my compatriot decided to go with the classic soup dumplings. These were great, I personally really enjoyed them. I’m no expert when it comes to soup dumplings, but I thought they were excellent. Something you should consider if you visit.

The other dumpling choice we made to round out our meal was an interesting original (at least for me) that I’d never seen before. The chicken and cashew dumpling was delectable, light, and tasty. Add hot oil and soy sauce and you’re good to go.